War and conflict are unfortunately omnipresent, displacing millions of individuals and communities worldwide. Die Bärliner invites readers to revisit some past pieces from students reflecting on the hardships encountered by refugees, international responses to forced migration and racial dynamics. The authors raise questions about pacifism and violence through personal narratives and opinions, and also provide a Berlin museum review.

In light of the current developments in Ukraine, we encourage students to get involved in the many initiatives and events on campus and greater Berlin, advertised by BCB’s Civic Engagement Office. 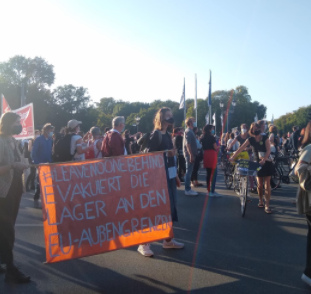 Océanne writes about the challenging conditions of the Moria refugee camp in Greece and how Germany (and the EU) reacted to it.

“The presence of banners and graffiti across Berlin addressing the issue comes as a result of a worsening situation over the past five years. The #Wirhabenplatz movement, or “we have space” in English, sends the message that we can and should allow these international workers and expats in. While not often called expats due to their birthplaces, these migrants are indeed expats looking to live, work, love, build or rebuild their lives and contribute in various ways. The main point is that we easily have space.”

July 2018- A Call for International Solidarity: On the Fight for Immigrant and Refugee Justice by Elena Gagovska

“Keine Familie Ist Illegal” (No family is illegal) written in chalk near the US embassy in Berlin. (Credit: Elena Gagovska)

After attending two demonstrations in Berlin, Elena Gagovska reflects on what ought to be done in regards to the fight for justice of racialized immigrants and refugees globally.

“I did feel that this march was important for me and its participants too. It seems like immigration is the issue of our generation and a fight that big is not easily won. It requires the determination and continuous participation of a large number of people. When making demands as a group rather than as individuals who, in general, do not have a high degree of agency, entities of power are put under greater pressure to meet those demands. It’s monumentally important for people to not feel like there is no hope for change. So we ought to savour these moments of solidarisch joy to keep us going. To quote a character from Pride (2014) “When you’re in a battle against an enemy so much bigger, so much stronger than you, to find out you had a friend you never knew existed, well, that’s the best feeling in the world.”

The Anti-War Museum around 1925

Baron gives us a guided tour through the Berlin Anti-War Museum by offering his personal impressions and doing a review of the museum and its history.

“As Freud has noted, a great deal of active energy is invested into the act of being passive, and this was evident in the pacifism espoused by the Anti-War Museum in several ways. Mr. Spree opened our session by asking each of the participants as they walked in whether they were a pacifist, and ‘if not, why not?’ (a confrontational method, but one I appreciated.) He also wore a distinctive symbol on his jacket lapel, one which hung also outside the museum: a rifle being broken in two. As our seminar leader Irit Dekel asked: how much violence would be needed to actually break a rifle, or indeed all rifles? This active passivity has been with the museum since the beginning, if the title of Ernst Friedrich’s first book is anything to judge by – War Against War (1924).”