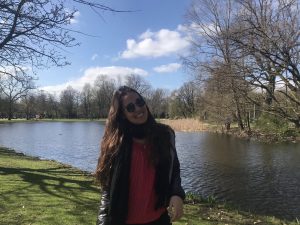 Daniela is a sometimes proud, sometimes not so proud Brazilian student in her second year of the Economics, Politics, and Social Thought Program. She identifies a lot with Monica Geller from Friends because Daniela’s probably too organized for a 19-year-old college student. When she’s not complaining about her country’s president or trying to convince her peers that Portuguese is just as cool as Spanish, Daniela can be found with her headphones on chilling in the sun, planning trips or watching conspiracy theory documentaries.